When the second generation Mazda 3s came out I wasn’t really the biggest fan of the Cheshire cat grill and bumper combo but when I saw a few modified I warmed up a little bit.

Then when Steve -aka ‘Aitch’- sent me a Photoshop of what he planned to do with a 2012 SkyActiv Sport my opinion changed almost entirely. 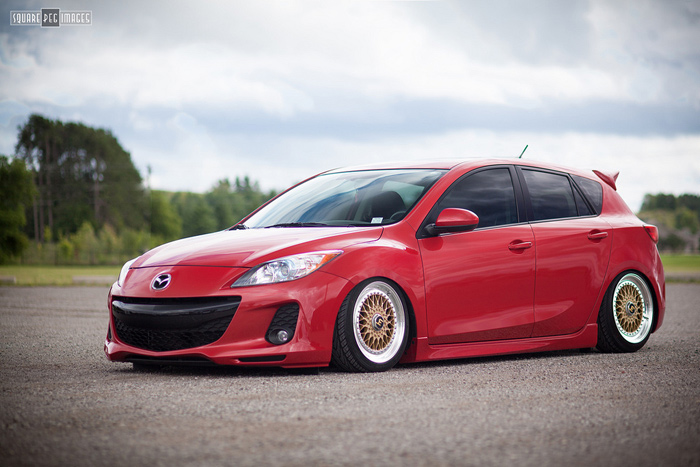 The Photoshop was straight to the point, and proved that when positioned closer to the ground the front end of the new 3 transformed from a slap happy grin into a menacing smile.

Of course sometimes the simplest things take the longest and what you see today is the result of a lot of planning, dedication, and most importantly patience. From December of 2011 to a about a week ago Steve drove at stock height and avoided looking at the wheels he saved from his previous build.

While it would have been easy to bolt up some coils and install his wheels at any point during this waiting period Steve knew that coils simply were not going to cut it for he and his growing family so he held fast for a pneumatic solution to his wheel gap problem. Of course with his 2012 being a new platform his options were fairly limited,  he could either build his own or wait for a kit to be developed.

Thankfully the suspension setups between the two 3 generations is nearly identical which meant the two companies already developing kits had a bit of a head start. In the end AirRex ended up being the company to pass prototype phase first and Steve along with another local 3 owner wasted no time placing their orders.

Once some time opened up in his schedule to install the kit Steve was left with the almost exactly what he imagined back in December. Steve’s cars have always stood out amongst the 3 crowd and this is no exception, and the fact that it sits exactly like this with no fender modifications at all is simply remarkable.

Congrats Steve for getting it all together, and now I can successfully say I didn’t blow the secret!

Here’s a quick video of it in action.