Project Why Wait started with a basic idea and plenty of ‘I’ll fill in that blank later’. Brakes, motor, suspension, wheels, tires these are all things I know. So, selecting what to run for each came fairly easy.

But a functioning vehicle is so much more than the big-ticket items. With all of my previous ‘projects’ I’ve been able to heavily rely on factory engineering. To be honest I’ve historically taken said engineering for granted. I can’t tell you how much time I’ve spent researching things like accessory drives or parking brakes. Neither items are glamorous by any means, but both quite important.

One area of the truck I thought I had nailed down, until I really started thinking about it was steering. When I removed the cab from the original chassis in update five, I took a Sawzall to the factory column right above the steering box and kept disassembly thundering along. I figured I’d be a bearing, a bit of double ‘D’ shaft, and a couple U-joints away from a functional steering system sometime in the future.

Using the factory column would be the best fit for my truck right? After all it’s what GM spec’d it with. 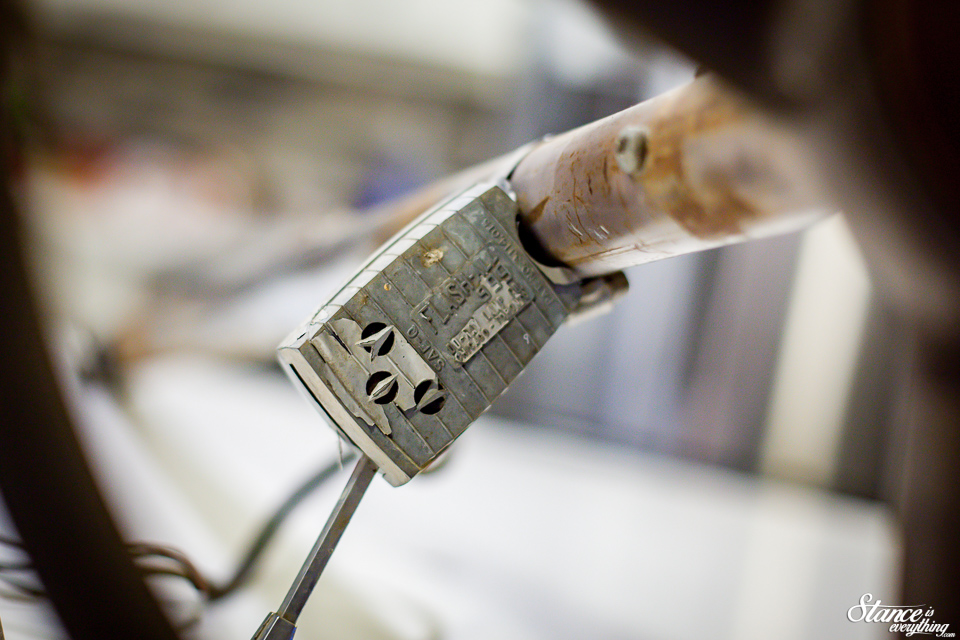 Well, as fitting as the original column might be it’s not without its faults. Most notably it’s not a tilt column which means though the column fit the truck, it might not fit me. At the end of the day I’d like to be comfortable behind the wheel of this truck. Or at least as comfortable as possible in a farm truck that’s nearly 70 years old.

With my seating still up in the air –I’m going bench, but not sure if original or late-model– any adjustment at the wheel will be beneficial down the line.

It is possible to change the angle of a fixed column but there’s no guarantee that angle would fit my wife or son. Never mind the potential issues adjusting a fixed angle column might introduce on the motor side of the firewall. With an Advanced Design truck the tilt problem can be solved a few ways. One of the most common is to use a column from a late-model GM vehicle. Van columns are usually the go to because often they don’t have an ignition directly on the column. There are also a number of generic tilt columns available from mail orders and performance shops all across North America.

I considered both routes, but with a used column there’s simply no true guarantee it will be any good, which is always the problem with used hardware.

With the offshore steering columns, reviews are split 50/50. Some people have no problems while others are plagued with excessive rattles and ever-increasing wheel slop.

After asking friends, both professional builders and non, for a do it once, do it right, product one name repeatedly came up as a sure bet; Ididit. Ididit has been manufacturing aftermarket columns since 1986. They’ve built their business on providing a quality product for builders like myself. Proof of this is their ‘I did it with Ididit‘ tour that searches out grass-roots builders all across America.

So –pardon the pun– I did it. I gave Ididit a ring, we chatted about the project and both agreed that an Ididit column would be perfect for Project Why Wait. Their tech department suggested an application specific 1947 – 1955 GMC retrofit column. Shipping was quick and the column arrived late last year. But, with all the rust repair I’ve been doing it was tucked safely away within the current chaos of my garage.

This weekend temperatures here in Ontario plummeted. Twenty degrees Celsius below zero without the windchill. I’m dedicated to my project but that’s just far too cold to be productive. With idle hands free I decided to crack open my Ididit box and take a look at what I’d ordered. If you’re wondering, yes these photos were taken in my kitchen and no I didn’t wind up sleeping on the couch. Ididit offers a few different options for all of their columns and in the end I selected an unpainted tilt, shift, column without an ignition.

Column shift was chosen over a floor shift simply because the cab really isn’t that big. Any floor space I can gain back will make all the difference during long summer cruises. I went with unpainted, because I’ve yet to narrow down my interior color scheme. However I have a sneaking suspicion I will want the roof, firewall, dash, door jambs, and steering column to all be the same color.

Finally I chose no ignition because I’d like to use the factory one. Pulling the column out of the protective packaging, the first thing I noticed was its weight. The column is an incredibly sturdy unit that makes the original seem quite dainty in construction.

Looks wise, well, it’s a no brainer, the Ididit column is a beautiful piece. However being of mostly metal construction it doesn’t look too modern for a 50s truck. Ididit proudly manufacturers all of their columns in Michigan. North American construction is a nice reassurance for something as important as a steering column. Offshore products can be more than adequate, but it’s nice to know that should any problems arise I can get a replacement part within a few days after a conversation with someone just across the border. Even more reassuring was the fact that the Ididit logo could be found on all the key components. Almost everywhere I looked I found an Ididit embossing or an Ididit sticker. The various additional packages inside the retrofit box contain all of the parts necessary to mount the column, and shifter.

Ididit also offers a number of add ons for both their universal and retro fit units. I’ll probably be purchasing their swivel floor mount, and column mounted shift indicator sooner rather than later. Despite, realistically, being a few months away from needing the instructions I quickly flipped through them. Being my first go round I live and die by manufacturers instructions and these were thorough yet to the point. I’m looking forward to putting the column in the truck later this year, and of course I’ll follow-up with an installation post. Until then it’s back to waiting for the weather to break a bit so I can finish up some more rust repair.

Lots more to come in 2019 from Project Why Wait! Be sure to follow the progress both here and on Instagram under the #siegmc hashtag.

Project Why Wait: Get In Where You Fit In