In the Facebook group Primer Rust and Rat Rods S10s come up quite a bit. Over the last few years S10 frames have become an incredibly popular option for those building just about anything.

At this point there may not be a project an S10 frame hasn’t been thrown under. As a result S10 bodies have become somewhat expendable. Or at least expendable to those with no love for first generation s10s in their stock(ish) form.

A few days ago Chris Stagg posted photos of his S10 which one can only assume was piligided for parts somewhere along the way. 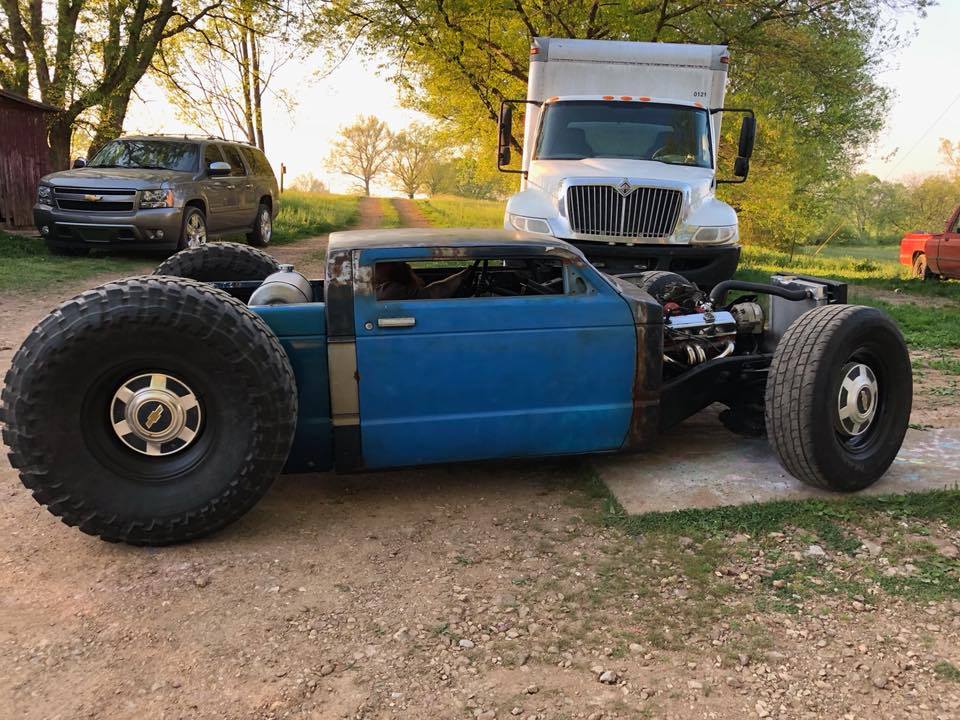 Making lemons out of lemonade, Chris got out his grinder and created this one of a kind hot rod.

Chopped and shortened, the truck sits on a custom chassis that looks like it uses a hint of the original s10 suspension. The big wheels and stock hub caps were the plan from the start and, honestly, I kind of dig the overall look. Body modifications on this truck are pretty plentiful and the most obvious is the chop. Combine that with a healthy channel and you’ve got a vehicle that is roughly three apples high.

It looks as though it would be un-driveable, but the owner does manage to get in and drive the thing.

At this point he’s just driving it around his yard, but still, that alone is quite a feat.

It doesn’t look like the most comfortable ride, but he wouldn’t be the first person to put style behind comfort. There’s currently no real front end on the truck, but Chris is trying out the two looks above.

Judging by the radiator placement in the video it looks as though he’s leaning more towards the Jeep side of things, but with a project like this you never really know.

All in all the truck isn’t exactly something I would build, but I am not mad at it either. Of the S10 “rods” that have made WTF Friday posts this is one of the best.

No explicit build thread for this truck, but if you want to see updates every now and again join Primer Rust And Rat Rods