Some people build cars and some people assemble cars and personally I have no issue admitting that I assemble cars, meaning that my car is comprised entirely of off the shelf parts and is easily re creatable.

The goal of course is to one day be like Jeff who at the age of 19 has already proven himself a car builder by creating a vehicle worthy of accolades from enthusiasts world wide.

Recently Chris Johnston got a chance to catch up with Jeff to not only take some pictures of the car but also get a bit of a back story on it’s creation. This ’94 Mini was purchased by Jeff while in high school after he worked a lot of shitty part time jobs to be able to afford it.

Originally a Japanese model that had already been converted to LHD when he got it Jeff figured he would leave well enough alone and just drive it, as we all do. Eventually he supercharged the stock engine but soon after he was lusting for even more power so he started to do some research. 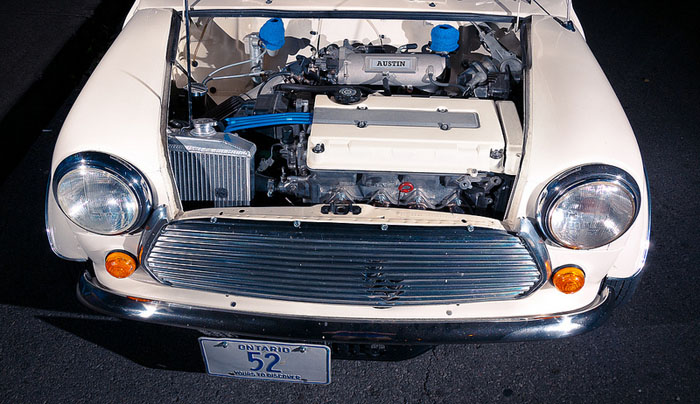 After a lot of time on forums he decided a b series swap would give him the power he was after so he followed an ad on kijji to a b18c motor.

To his surprise when he arrived to pick the new motor it was still attached to the car. After a compression test checked out, he took the entire Integra home and began taking the parts off it including; ECU, wiring harness, engine, shift linkage, and all the other assorted odds and ends needed for the swap.

Other than the exhaust the entire car was built by Jeff in his parents garage and is beyond cool. A build thread on the car can be found here.