Before 2015’s Importfest show, my car need a little help in the detailing department. Months prior I had used 3D Products HD Polish to get rid of a significant scratch in my door but the entire car needed a thorough once over before it hit the show floor.

So I turned to my friend Bryan Walroth of Concours Touch, who is the same person that helped keep my white 3 in tip-top shape after all the abuse I put it through.

True to form Bryan got my car looking fantastic and I snapped some photos along the way. However the photo set got lost in the shuffle of going to events, finding Project Why Wait, and tending for one year old.

I came across the photos in the middle of winter and held on to them until now because spring is in the air, which means spring cleaning is just around the corner. 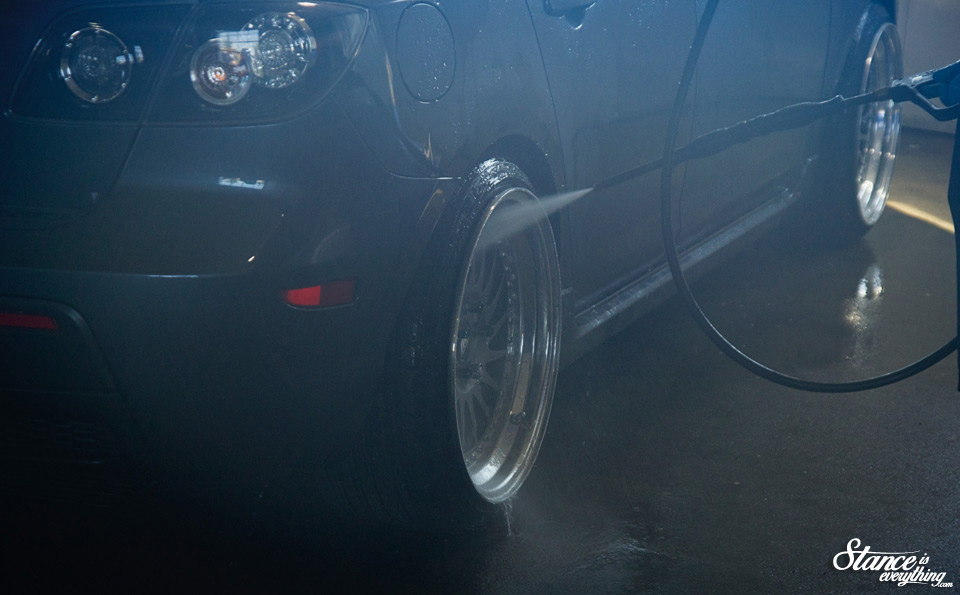 Admittedly I brought Bryan a pretty dirty car –not down right filthy– but certainly not the cleanest thing in the world, and far dirtier than I’d ever post on here.

So to hide my shame I jumped into taking photos after he’d already started. 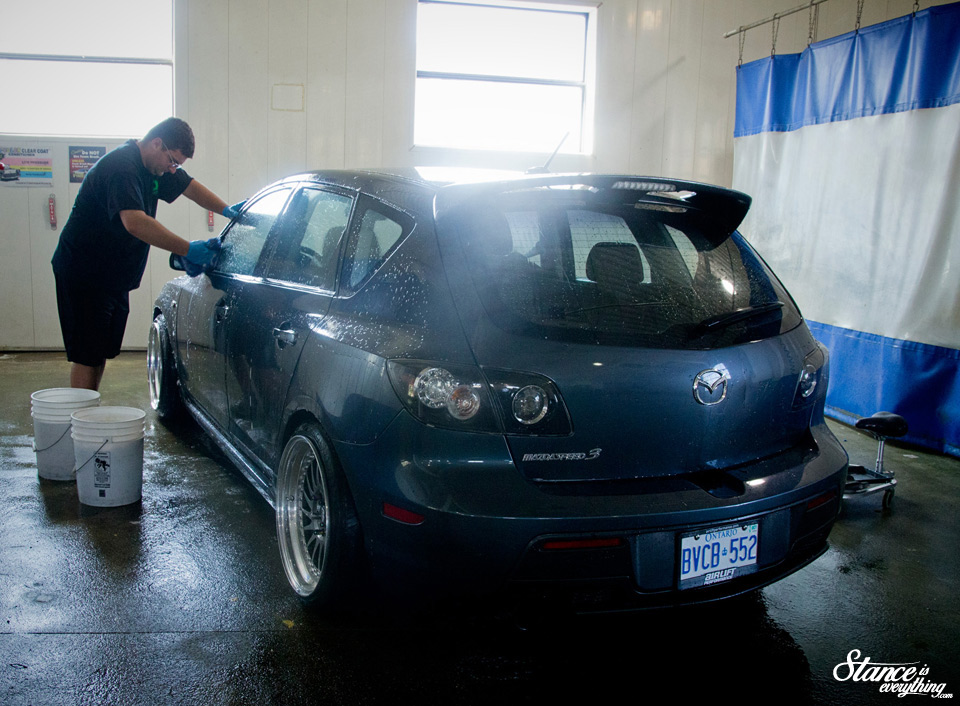 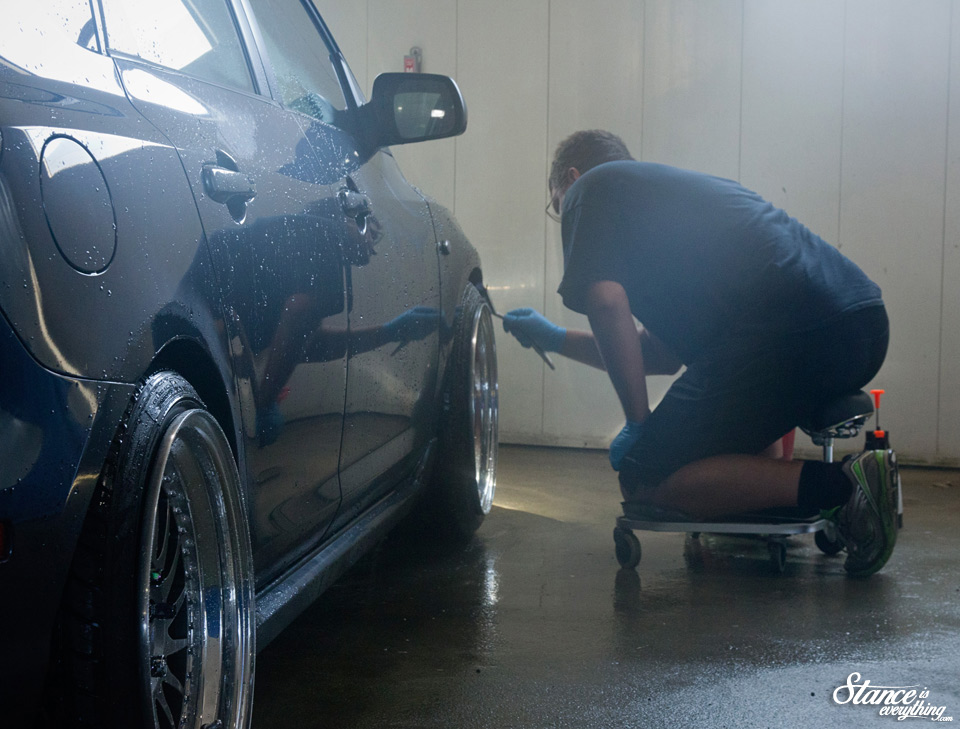 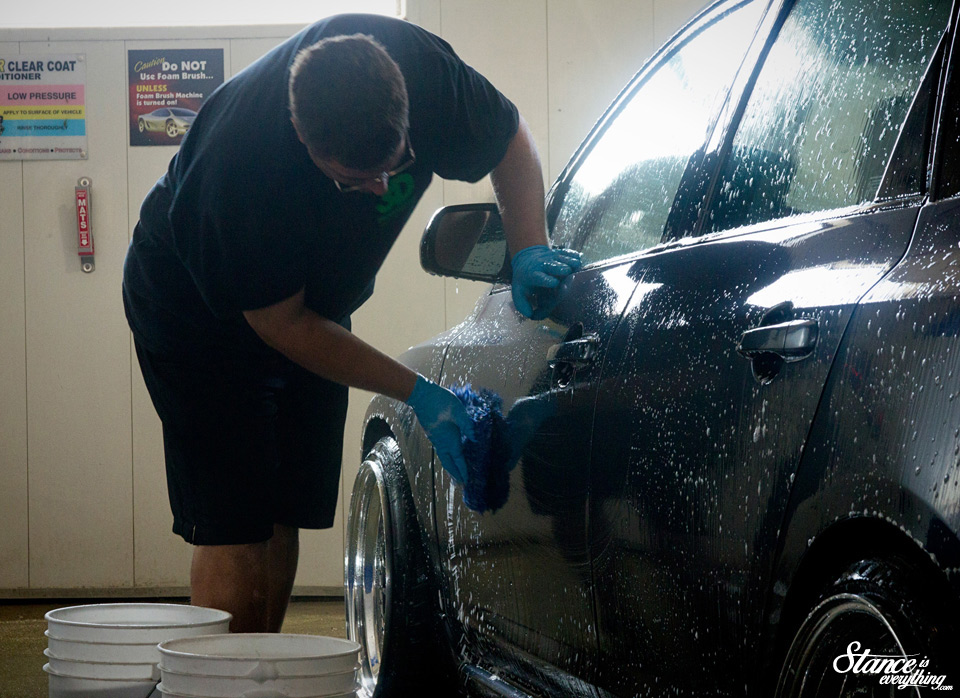 Ever the professional Bryan got right to work in the bay he uses from time to time at a local car wash facility, don’t worry none of the dirt filled coin operated brushes ever touched my paint. What did touch my paint however was practically the entire 3D Products line up; HD wash was used to take of the road grim accumulated from driving to and from work, as well as to shows all over Ontario. 3D’s orange de-greaser made short work of the mosquito collage on my front bumper, and the brake dust remover restored the hard work I put in with 3D Products Metal polish earlier that year. If for whatever reason you don’t already use the two bucket method I suggest you start. It seems like common sense to use one bucket for soapy water and once for rinse but when I first found out about it (part way through ownership of my first car) I had a eureka and face palm moment all at once. With the car clean and dry it was time for Bryan to use 3D’s combination polish and wax product called HD speed. This product is designed to remove moderate scratches and swirl marks (of which my car had many) in a short period of time.

Building on the work I put in with the HD polish Bryan really brought out the best in my seven-year old Metropolitan Grey Metallic paint. It could still use a real cut and polish down the line but that currently isn’t in the cards. Of course after all was said and done I had to take a few pictures of the car nice and clean and almost fittingly this photo shoot was cut short as storm clouds suddenly blew in and rain showered down from the heavens. Looking back at these photos today I feel pretty guilty about how dirty the car currently is after winter.

While it would be easy enough for me to give Bryan a ring again this year and get him to get my car back to shape right quick but, he did give me a box of product that I really should learn to use.

Looks like I have a weekend of polish, elbow grease, and  beer in my future.

A Visit To: Air Lift Company